The award honors Alphonse Desjardins, who was instrumental in forming the Canadian and U.S. credit union movement, as well as pioneered youth savings clubs and in-school credit unions.

This was the second consecutive year for CVF to earn the Desjardins award, receiving 2nd place honors among credit unions of its size. The award recognizes exemplary credit union efforts to teach personal finance concepts and skills to youth and adults, including members and non-members.

Emma Teller, CVF vice president of marketing and business development, shared several of the activities the credit union leads throughout the year.

These include student credit union branches at five Michigan Catholic schools including All Saints in Canton, St. Valentine in Redford Township, St. Michael and St. Edith in Livonia, and Our Lady of Sorrows in Farmington.

Preparing youth for college is another facet of the credit union’s literacy program. These include hosting a budget and financial workshop for college bound teens at the credit union, participating in financial reality fairs at local high schools, and providing a series of social media posts about math and money, prom on a budget, college dorms and first apartments, and other topics.

During the past school year, CVF also worked closely with Catholic Central’s Finance Club to help them qualify for state finals in the Personal Finance Challenge. The CC students succeeded in placing second in the statewide high school competition.

“This award belongs not only to Catholic Vantage Financial, but also to the students, parents, teachers and schools who understand that financial literacy is important to ensure everyone’s success.”

Now serving all Catholics within the Archdiocese of Detroit, Catholic Vantage Financial is considered Michigan’s leading and most well respected Catholic Credit Union. In addition to the credit union’s offices, ATMs and extensive online services, members have access to more than 5,000 shared branches and nearly 30,000 ATMs nationwide. Member deposits are insured to $250,000 by the National Credit Union Administration (NCUA), a U.S. government agency. For more information and to learn how you can join, call 734-432-0212 or visit www.mycvf.org. 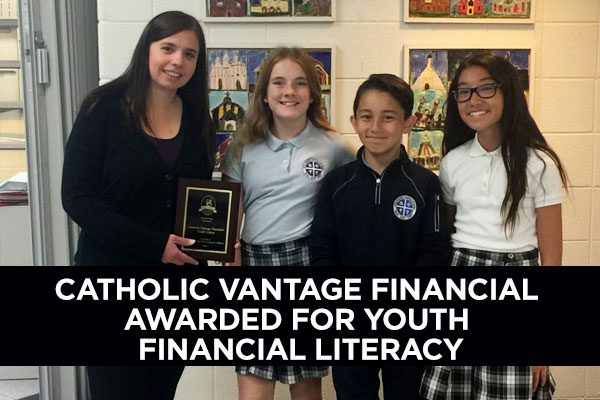