Christmas Angels give family a joyful start to the New Year

Plymouth, Mich. January 10, 2019) Did you know that Christmas Angels can multiply?

Members, volunteers, staff and friends of Catholic Vantage Financial watched it occur over a few short weeks before the holidays – just in time to help a single mom with two young children and another on the way.

While the credit union, with branches in Livonia and Plymouth, is known for its generosity, this year staff proposed a project to CEO Peter Bagazinski that exceeded everyone’s expectations. 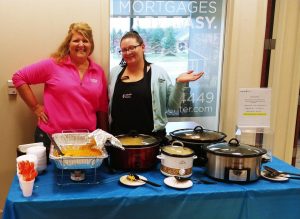 “The credit union hosts a nice Christmas party and program for staff, volunteers and family members,” said Gyetvay. “We suggested that we could use this opportunity to give back to the community.” They found a family in need in Redford through the local St. Vincent de Paul ministry.

“Once we explained what we wanted to do, everyone jumped on board with ideas for fundraising,” added Gyetvay. Beginning in November, staff held a chili cook-off and a mac and cheese bake-off in the Plymouth branch as well as a hot dog and popcorn day at the Livonia branch. Staff also hosted bake sales. All of the events were open to credit union members and visitors.

For a small donation, members were invited to place a name on a cutout Christmas Angel to be posted in the branch.

The largest fundraising effort was made possible through the collection of donated items in themed baskets that were raffled at the credit union’s annual Christmas party.

According to Emma Teller, vice president of Operations, there were some amazing baskets. She said, “It was so moving to see everyone get involved. They really used their imagination and creativity.” 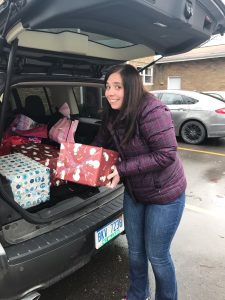 All of the efforts paid off by raising $4,000, a large sum for a credit union of 30 employees along with an untold number of Christmas Angels that kept multiplying.

Shopping for the selected family produced just as much enthusiasm and even bargain hunting among the staff. “After everything was purchased and wrapped, it looked like Santa stopped by our board room,” said Gyetvay.

The Christmas Angels delivery to the family just before the holidays included food, clothing, toys and much needed supplies. Because of the funds raised, they were also able to buy new tires for the mom’s car so that she could safely drive to work and take the children to school.

“We were so excited that Catholic Vantage Financial chose one of our St. Vincent DePaul families. This was a first for our particular conference. The timing was almost uncanny in meeting this family’s unanticipated needs. The mother just could not say thank you enough,” said Sue Fitzpatrick, a conference secretary for St. Vincent de Paul. “She felt the group went above and beyond for her family and that they did have the best Christmas ever. They truly were angels for her.”

“It was a great team effort. There were heartfelt feelings all around—thanks to the generosity of our members and everyone who participated,” said Gyetvay.

Teller added, “Enough money was raised that the team can set some aside to help a second family and get a head start for next year’s Christmas Angels.”

And, that’s how Christmas Angels multiply.